Home / World / Russia announces action with US in Aleppo on 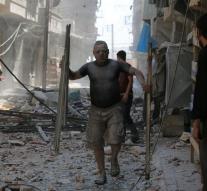 moscow - Russia and the United States are close to an agreement for joint military action in the Syrian city of Aleppo. Russian Defense Minister Sergei Sjoigoe said Monday know that the joint plan is gaining shape.

Sjoigoe said that if Russia and the US act together in Aleppo they can ensure peace. Refugees could then return to the city in northwestern Syria.

Aleppo has been the scene of heavy fighting between insurgents and government forces. In the part of town that is still held by the rebels, life is estimated to have about 250 000 people. German Foreign Minister Frank-Walter Steinmeier called late last week to set up an airlift to Aleppo in order to provide residents with much needed relief supplies.


Shortly before Russia and Syria had promulgated short daily fight breaks so that convoys of relief supplies safely could enter the city. Russian Foreign Minister Sergei Lavrov said on Monday that Syrian rebels have used previous fight breaks to regroup. For that reason, the fight breaks according to the Russian minister can no longer be inserted.