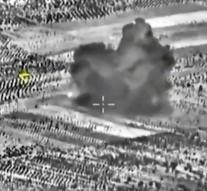 ankara - The Russian Air Force has given Thursday in the Turkish capital Ankara explanation about two incidents in which Russian warplanes violated Turkish airspace . This happened on October 3 and 4 , to the anger of the Turkish government.

The Russian delegation headed by General Sergei Dronov assured his Turkish interlocutors that measures have been taken to prevent new violations of the airspace , the Turkish military announced in a statement.