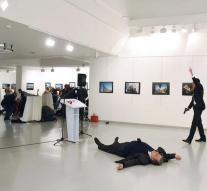 moscow - No day after the murder of the Russian ambassador in Ankara are Russia, Turkey and Iran agreed to cooperate more closely in the war in Syria. The three countries are willing to participate in a peace agreement between the Syrian government and the opposition.

That said Russian Foreign Minister Sergei Lavrov Tuesday after talks with his colleagues in Moscow. According to him, the resignation of Syrian President Assad is not a priority.

The Russian Defense Minister Sergei Shoigu arrived Tuesday with his counterparts from Turkey and Iran. On the murder of Ambassador Andrei Karlov Shoigu said: 'We understand that such actions go against our struggle against international terrorism. But I'm right in saying that we will not give up this fight. '

The body of the diplomat, who was shot by a Turkish policeman was Tuesday after a ceremonial meeting at the Ankara airport flown to Russia.