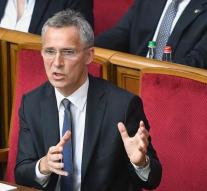 brussels - Russia and NATO again sat on the table on Thursday, including recent incidents. 'An open and useful discussion,' NATO summit Jens Stoltenberg summoned the consultation at the Brussels headquarters.

The prevention of risks, misunderstandings and escalation was high on the agenda. For example, recent dangerous maneuvers of fighter aircraft from both sides came across the Baltic Sea. Information about upcoming military exercises was also exchanged. 'Encouraging progress,' said the Norwegian prime minister.

Over Ukraine, there were still 'fundamental' differences of opinion. Regarding Afghanistan, it was stressed that stability is essential for security in the region.

It was the fifth NATO-Russia council since the Western Alliance suspended political consultation in 2014 after Russian invasion of the Crimea. 'Dialogue can be difficult, but it is also essential in times of increased tensions, like now,' said Stoltenberg.