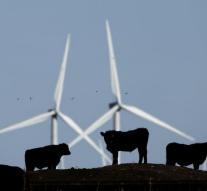 moscow - Russia and China expressed their support for the climate treaty of Paris on Thursday. This happened while the international community was awaiting suspending US president Donald Trump wanting to withdraw his country from the international agreement.

A spokesman for the Russian government stressed Thursday that its country 'attaches great importance' to the climate agreement that must combat global warming. 'But it goes without saying that the effectiveness of this agreement is likely to decrease if the main players no longer participate,' he added.

China also does not appear to be back to scratch. Chinese Prime Minister Li Keqiang said in Berlin that his country 'stands for its responsibilities in the field of climate change'. He made that ruling during a joint press conference with Chancellor Angela Merkel, who was pleased to respond to the communication.