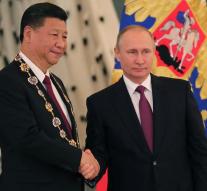 north - Russia and China agree on a joint set-up to reduce tensions around the Korean peninsula. North Korea must freeze its atomic and rocket programs, but the United States and South Korea must also quit their large-scale military exercises, according to the Russian Foreign Ministry on Tuesday.

The ministry came with the statement following talks between President Vladimir Putin and his visiting Chinese official Xi Jinping. In the statement, Moscow and Beijing also state that Washington should immediately suspend the stationing of the THAAD anti-missile system. The US states that this stationing is necessary to remove the North Korea rocket launch.

North Korea said Tuesday that it had for the first time held a successful pilot launch of an intercontinental ballistic missile, which could hit the US state of Alaska.