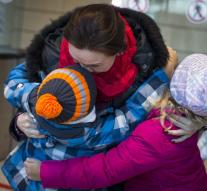 moscow - Russia on Saturday and Sunday all 11,000 Russians brought back from Egypt. Deputy Prime Minister Arkady Dvorkovitsj has let it know on Sunday the Russian news agency RIA Novosti. Doing so, he said he expects even more people back during the day.

President Vladimir Putin decided Friday that Russian air carriers for the time being no longer fly to Egypt, as long as it is not clear what happened to the Airbus A321 of Metrojet which crashed on October 31 in the Sinai. A bomb may be the cause of the crash. Jihadists claim almost immediately after it crashed they were responsible.

Some 80,000 Russians were stranded in Egypt. Russia sends itself planes to the country to bring the tourists back. The people who go through that regime to Russia, may often only hand baggage. Rumors are that the Egyptian security personnel at the airport does not check well and even corrupt. In addition, the scanning equipment is outdated.

The unit of Russian society departs from the Egyptian resort of Sharm el-Sheikh bound for St. Petersburg. About half an hour after takeoff the plane crashed. All 224 passengers, mostly Russians, were killed.