Home / World / Rush on the first Comic Con of Africa 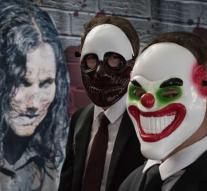 johannesburg - Thousands of lovers of comic books, science fiction and fantasy have come to the first African edition of Comic Con. The three-day event in Johannesburg is completely sold out, the organization reports. Visitors come from countries such as Botswana, Zambia, Zimbabwe and Nigeria.

The phenomenon Comic Con, the abbreviation of Comic book convention, dates from the seventies. It started as a trade fair for comedians, but has now become a worldwide phenomenon. There were already Comic Cons in Amsterdam, London, Delhi, Sydney and Dubai before. Now Johannesburg can be added to that list.

Visitors were dressed up like super heroes on Friday, such as Aquaman and Captain America. They played video games and bought merchandise. Visitors can meet such celebrities as Kevin Sussman from The Big Bang Theory and Travis Fimmel from Vikings. Attention is also paid to local superheroes, such as Kwezi.