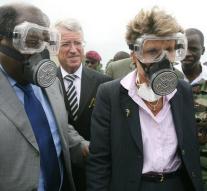 amsterdam - Next week, in the Netherlands, a dirty battle will be released for Trafigura's poison mills, as a battery attorney will report to the Amsterdam court on behalf of hundreds of thousands of Ivorians. They want to condemn the oil company in the Netherlands because of dump poisoning in their country, eleven years ago.

The legal battle on the effects of the criminal poison dump has been demonstrably fraudulent by civilians from the stray West African country. Regular illnesses are attributed to poison, forged medical statements are presented to the Dutch court. There is currently an investigation into the Hilversum advocate who played a role in this year because of this fraud.

On Wednesday, a Dutch claim foundation, with prominent specialists in the board and assisted by numerous lawyers, conducted a new procedure on behalf of the Ivorians before the Amsterdam court. The goal is to pay a compensation of at least one hundred million euros at the oil company.

Trafigura has already paid a quarter of a billion of damages in recent years, but it was very bad for the affected victims in Cote d'Ivoire.