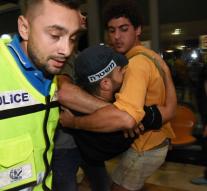 - Thousands of Israelis want to arm themselves , now the violence between them and the Palestinians is flared . The Israeli TV station of the army reported on Monday that the number of applications for gun licenses in recent weeks has increased dramatically . The Department of Homeland Security , the number of requests anymore.

In recent weeks were many incidents of Palestinians, Israelis stabbed. Police Minister Gilad Erdan announced subsequent to that applying for a gun license must be accelerated and made ​​more flexible.

Now it appears that the authorities can not cope with such a relaxation of the rules. As the switchboard of the Ministry became overloaded. This allowed no more permits are issued at all.