Home / World / Run in a row for minors in Calais 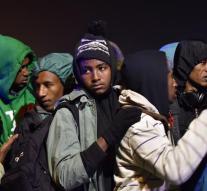 - has penetrated the proceeding authorities in the Calais jungle. Monday was a run on the row where minors without parents could come forward.

Who is younger than eighteen, lives alone in the jungle and has family in the UK a chance to win leniency from the British. At the beginning of the afternoon, a large group of guys who all claimed to be under eighteen, to the hangar where migrants who want to leave the camp can register. They had to register and exchange tonight all their cabin for a bed in the container camp.

Calais are agents of the British Home Office site, which find out whether the family ties there are indeed. When in doubt about the age of the applicant, they try to find out his age.

Obaid Ullah, in his own words sixteen years old, is also in line. 'I have cousins ​​in London,' said the Afghan. He spent eight months in the jungle, but he was unable to come to the UK. 'My things are still in the jungle, let me register now. '

In recent days, 200 young people have made the crossing, including fifty girls. They met not necessarily meet the criteria, but walked according to the British threat in the jungle.

It is intended that this week 400 minors direction to leave the UK. Those who are rejected by the British, come in a French daycare program.