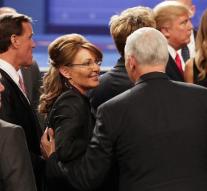 - Now Donald Trump has won the presidential elections, everyone asks himself how his government will look like. Officially pardoned no jobs yet, but US media are mentioned already names according to sources in the Trump kamp.Mogelijk Newt Gingrich

Trump adepts of the first hour seem to be able to count on a job in the new government, if the rumors are any indication. Former New York Mayor Rudy Giuliani and New Jersey Gov. Chris Christie to be named as the new Minister of Justice.

Christie throws the Bridge Gate scandal may well spanner in the works. Two of his closest associates were sentenced this month for their role in the scandal. A judge found evidence that traffic lanes on a major arterial road were signed by people from Christie's camp in retaliation against a Democratic mayor. Christie has always maintained that he knew nothing.

One of the best known names is that of Sarah Palin, the former Alaska governor and vice-presidential candidate John McCain in 2008. Trump said during the campaign to add like her to his Cabinet. It is tipped to both the Interior Ministry and that of Energy.

Ex-General Michael Flynn is a leading contender to head the Department of Defense, but would previously have to get special permission from Congress, Politico writes. Former officers should include normal wait seven years before they can hold the highest civilian job at the Pentagon. Republican Senator Jeff Sessions has also been named as a possible defense minister.

Newt Gingrich follows according to the sources as possible John Kerry as Secretary of State, the most obvious feature for a US government abroad after the president. John Bolton, who was under George W. Bush's ambassador to the United Nations, is also mentioned.