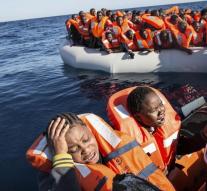 talinn - The code of conduct set up by Italy for aid organizations that rescue boat migrants in Libya must get there soon. The EU Ministers for the Interior and Justice want 'clear rules', they said in the Estonian capital Talinn on Thursday. There is no willingness to open ports to relieve Italy.

Auxiliaries are accused of raising a type of ferry service on the coast of Libya. They would play in this card human traffickers, who are still busy with little fuel.

The government welcomed the action plan presented by the European Commission on Tuesday to curb the migration flow through the Mediterranean. Italy was given support, but there were hardly any concrete commitments for assistance.

Germany and France earlier said this week to allow extra migrants from Italy to take over. According to Justice Minister Stef Blok, the Netherlands is doing much in this area. 'Just opening more ports will not solve the problem,' he added.