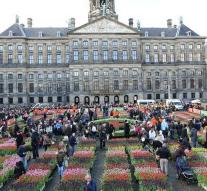 amsterdam - Who wants to visit a museum or attraction in Amsterdam and want to know how long the lines are at the door in advance, can now consult the so-called Rows Radar. This test will reveal the capital waiting for visitors and at the same time see if this can lead to a better distribution of people across the city.

According Amsterdam Marketing, which makes the pilot together with the municipality, the capital has thus a world first. At present, tens of museums and attractions associated with the Rows Radar, including the Van Gogh Museum, Anne Frank House, Rijksmuseum, Eye Film Museum, Cobra Museum (Amstelveen) and Frans Hals Museum (Haarlem). If the pilot proves successful after three months, can join more cultural institutions.