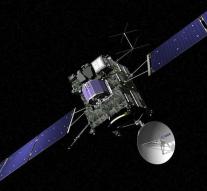 - The mission of the space probe Rosetta gets its final Friday. Then crashes the satellite of the European Space Agency on 67P / Churyumov-Gerasimenko.

Rosetta was launched in 2004 and wrote ten years later history when the satellite from an unmanned scout, Philae, on more than half a billion kilometers from Earth landed on the comet. It was the first time that such a controlled landing was performed on a comet. The operation did not go smoothly: Philae landed in a cave where sunlight could hardly reach the lander. This allows the battery became exhausted soon after landing. Which could later charge again, but the landing robot was again located only this year.

In the meantime, the Philae sent or research Rosetta, who in turn sent through to Earth. On the comet were oxygen molecules, water vapor, carbon monoxide and nitrogen, sulfur, and carbon compounds were found. In particular, the discovery of oxygen was surprising.

The satellite is disabled conscious because of the faltering communication Philae. After the crash remain Rosetta and Philae run into eternity on the comet around the sun.