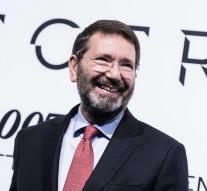 rome - The mayor of Rome three weeks ago his resignation because of a scandal declaration, nevertheless decided not to leave. The sexagenarian mayor made ​​Thursday Facebook announced, despite resistance from the Italian Prime Minister Matteo Renzi.

Ignazio Marino came early October discredited after it became clear that he wrongly dinners themselves, family and friends had declared. He therefore brought his party, the Democratic Party (DP) which also Renzi is a member, in great embarrassment. While Marino has denied that he has done something wrong, he decided to submit his resignation. Why he has come back from his decision is unclear.

Premier Renzi took three weeks ago openly from Marinos behavior. The DP has threatened Thursday to withdraw all DP councilors if Marino would withdraw his resignation.