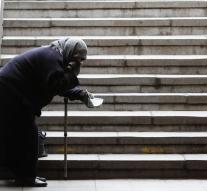 bucharest - Romanian police have broken up a gang that had kidnapped dozens of people and the victims treated as slaves and forced to beg them. There 29 gang members were arrested. In a village northwest of the Romanian capital Bucharest police freed three adults and two children.

Police believe the gang since 2008 certainly has kidnapped forty adults and children. They had to undress, were being put in chains and were forced to eat off the floor for the fun of the gang members. It is suspected that some of the victims were raped.

It is not known where all the victims are now.