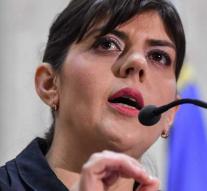 bucharest - The Romanian president Klaus Iohannis has to release Laura Codruta Kövesi from her position as head of the anti-corruption (DNA) service. The Constitutional Court determined this Wednesday to resolve a constitutional conflict that Iohannis has created with the government.

The Social Democratic government had asked the supreme court to make a statement about the president's refusal to dismiss Kövesi. Minister of Justice Tudorel Toader wants this because the DNA chief has gone beyond her book and has damaged the reputation of Romania. Iohannis was not convinced by his arguments.

The DNA complained under the leadership of Kövesi several leaders, including politicians and administrators of government institutions. Critics accuse the government of frustrating the approach to corruption by the dismissal of Kövesi.