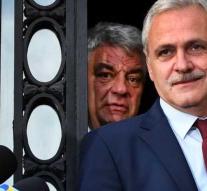 bucharest - The Romanian government party PSD, which has been in power for a year, agreed to the proposal to introduce the euro in 2024 at an extraordinary conference on Saturday. The leader of the Social Democrats Liviu Dragnea told the 4,000 people that joining the euro zone is a mandatory and logical step for Romania.

The Eastern European country can boast one of the fastest growing economies in the European Union but is still one of the poorest and most corrupt members. 'We have to look with daring and understand that this is a mandatory step and the only opportunity for Romania to join the rich in Europe. That is a project of national solidarity, 'says Dragnea.

Romania, which has some 21 million inhabitants, initially had the intention to introduce the European currency in 2014 and later updated it to 2019. But that date is also unrealistic given the poor progress made to meet the objectives of the EU with regard to the Romanian economy and institutions.