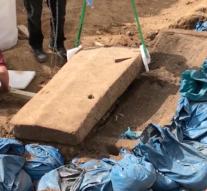 london - An approximately 1600 year old sarcophagus was excavated at work in central London. It is believed to be the last resting place of an aristocrat from Roman times, told the BBC on Tuesday. It would be a mother. The remains of a baby are found near the grave.

The stone graveyard was a few meters underground on a construction site and was discovered last month. Archaeologists were given a disappointment after the discovery. The chest was already opened and filled with earth, indicating that tombstones have struck. That probably happened years ago.

Gillian King, the chief planning for archeology at the local government, said that the tombs had left things that were of little value to them, but for us archaeologists are extremely valuable. 'According to King, the owner of the grave must have been very rich and influential.

Researchers transfer the sarcophagus to the Museum of London. There experts are going to test the bones and soil in the chest to find out how old the find is. Parts of Britain have been part of the Roman Empire for hundreds of years. The Roman occupation ended in the fifth century AD.

The Evening Standard has released a video of the excavation online.