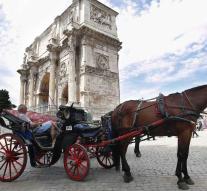 rome - The horse with carriage has been part of the streets of Rome since Roman times. For centuries the horse was by far the most used means of transport, but even now tourists are still comfortably leaning back around the Roman city center.

The municipality of Rome wants to put an end to this. The plan is that from now on the carriages will only be allowed to drive in parks. The horses would suffer too much from the busy street traffic. Also in the summer the carriages may not be used between 11.00 and 18.00 in the summer or if it is warmer than 30 degrees. There would be severe fines for coachmen who break the rules.

For Italian animal organizations is not enough. They want a total ban on horse carriages. They have submitted 10 000 signatures to this end. The horses would suffer under the carriage rides. Several years ago a horse of a carriage in the center of Rome succumbed. Another time a frightened horse slipped and then fell over after a moped driver cut the animal off the pass.

In Piazza di Spagna square at the bottom of the Spanish steps, some coachmen are waiting for tourists. Among them is the almost legendary Fulvio Fabiani with his long blonde hair. 'I've been doing this work for fifty years. I started when I was 18, in 1968. It's my life, I've always enjoyed it, 'he says, after he takes his cigar out of his mouth.

He does not believe that the horses suffer so much from traffic. 'We humans can also live in it anyway?' According to Fulvio, if they are only allowed to drive in the parks. 'The tourists want to drive around in a carriage through the city, not in a park. They come to see Rome, not the trees of Villa Borghese. 'The coachmen are offered a job as a taxi driver as an alternative. Fulvio makes a disposable gesture. 'They are not going to ask you suddenly whether you want to become a bricklayer?'

Once they had much better times, Fulvio knows. 'In 1920 there were 1200 coaches in Rome, now we are left with 29 coachmen,' he says. 'But we still have work. That's why I'm here. 'Fulvio sometimes reminisces about the good times when he transported famous actors through the inner streets of the city, or foreign women who were sometimes open to an adventure with him. But he does not give up yet. 'We have engaged a lawyer. I think we're going to win the fight! '