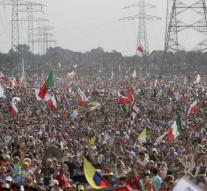 - A nineteen-year-old Roman woman is Monday, on the way to the World Youth Days, died of meningitis in a hospital in Vienna. Which reported the Italian media.

All participants of the group that women participated in the Catholic days in Krakow, Poland received antibiotic treatment because meningitis is highly contagious.

Austrian hospital where the woman died, all visitors to the Italy House in Krakow, which served as headquarters for the pilgrims from Italy, called to seek treatment.


From Italy traveled more than 75 000 young people to Krakow for the World Youth Day there from 25 to 31 July and took place where over a million people from 180 countries participated.