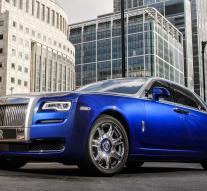 - Automakers such as Toyota, Volkswagen, BMW and Nissan, calling for a variety of reasons for years cars returned to the factory. The luxury car maker Rolls Royce is now in line with this 'trend'. Rolls Royce calls the car the type Ghost from 2014 back. There 's something about the air bags, reported Wednesday the British newspaper The Daily Telegraph.

It is a Rolls Royce less bulky recall than for other brands. Of the type recalled that cost more than 325. 000, there is only one, which has an American owner. Which should go to the dealer and the airbags will be replaced free of charge.