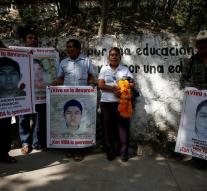 - Mexican soldiers have had a hand in the disappearance and presumed murder of 43 students two years ago. The prominent investigative journalist Anabel Hernández writes in a book that comes out soon and parts of which were published Friday. The loss was hitherto attributed only to corrupt cops and gang members.

Hernández performs a source, describing how soldiers were ordered by a drug lord to retrieve a batch of heroin was hidden in two buses that students had appropriated to ride a demonstration.

On the way to Mexico City, the bus was stopped. While soldiers were busy remove the drugs from the buses, the students had to have gotten through what it was. ' This created the unexpected need that they had to 'disappear', '' writes the Mexican journalist in the book.

The Mexican army is frequently accused of human rights violations, including extrajudicial executions. The Ministry of Defence or the Ministry of Interior responded to requests for comment. The office of President Enrique Peña Nieto did not respond. In connection with the case are over a hundred people fixed, including 22 policemen.