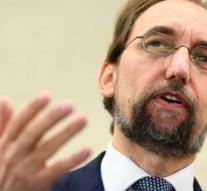 geneva - Security troops in Myanmar have robbed a half million Rohingya brutally in the northern state of Rakhine. Their houses, villages and harvests were destroyed to prevent them from returning.

This conclusion draws the United Nations based on talks with refugees in Bangladesh. The High Commissioner for Human Rights Says Ra'ad al-Hussein speaks of a 'school example of ethnic cleansing. '

The talks also showed that the army came into action before the Rohingya attacked police stations and a barracks on 25 August. Those attacks are always called as an occasion for the army to fight.