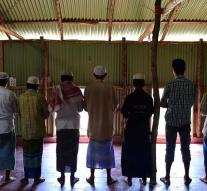 dhaka - A rebel movement of the harassed Muslim population in western Myanmar, the ARSA (Arakan Rohingya Salvation Army), has been guilty of mass murders. The human rights organization Amnesty International has reported that new evidence makes clear that Rohingya fighters last year certainly made one slaughter among men, women and children who were Hindu.

In the case of this mass murder alone, it is possible for nearly one hundred civilian victims. The ARSA has kidnapped and murdered more Hindu villagers and committed horrors against other non-Muslim residents of the northern part of the state of Rakhine, Amnesty concludes,

The Rohingya have themselves been victims of 'crimes against humanity' for a long time, committed by the Myanmar armed forces. He would like to ethnically cleanse the region according to observers. Hundreds of thousands of Rohingya have fled to Bangladesh.