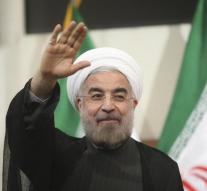 During his swearing ceremony on Saturday, the revered Iranian president accused his US official of undermining the international agreement with Iran.

Rohani was the cradle of the deal that ended his country with the United States and other international powers in 2015 to curb the nuclear aspirations of the Islamic Republic in exchange for the lifting of economic sanctions. The US president imposed new sanctions on Iran on Wednesday after he had called the agreement 'the worst deal ever'.

'Iran will not be the first to withdraw from the agreement, but it will not keep silent about the repeated breaches of the agreement by the US,' said the Iranian president on Saturday. In May, Rohani was re-elected as president of Iran by a large majority. European dignitaries attended his swearing ceremony on Saturday.