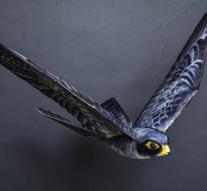 rotterdam - Undertakings Deltalinqs wants to combat the nuisance of seagulls in the port of Rotterdam with drones.

It is thought to robot or robotic falcons seagulls. With electronic falcons chased the gulls, with steerable seagulls birds are lured to places where they can do no harm, as the nature reserves in the Slufter on the Maasvlakte.

Companies in the western port area have been complaining for years bitterly about the presence of large colonies of black-backed gulls, gulls and herring gulls. The birds hunt with their aggressive behavior not only staff the wits. They also damage expensive equipment with their shit and force companies to take costly measures such as arched nets or let dogs patrol. The damage can be up to one hundred thousand euros per company per year, according to Robert Tieman Deltalinqs.


The companies have been given dispensation by the Flora and Fauna Act to deploy drones. The seagulls are protected by law.

Tieman: 'Without an exemption, we can not act for example against gulls nesting on a coal pile. '