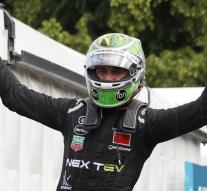 - A racing series with electric cars without driver is in the works. The championship will be named ' Roborace ' and need to do next season though its appearance as support act ' in Formula E championship of electric sports cars. It is envisaged that twenty racing cars as driver-less for one hour on the racing circuits.

Robot Race is according to founder Denis Sverdlov an ideal platform to test the latest technologies in the automotive industry. " It is a party of revolutionary technologies and innovations. We can show that robotics and autonomous driving actually exist, '' he says on the website of the Formula E.