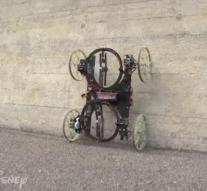 - A wall may in the future no longer represent an obstacle to a remote controlled car. Thanks to two tilting propellers he drives just against it.

The VERTIGO prototype robot developed by Disney Research and ETH Zurich. Thanks to the two tilting propellers does the robot car in there to defy gravity. The propellers fit the momentum so that the car can be connected to the surface.
The robot car can not only drive up walls, but also from the feet on uneven surfaces. It is not known when the technique in a commercial product appears on the market.

Moreover, the technique is not only suitable for remote controlled cars. Also, rescue and reconnaissance robots can benefit from the technology.