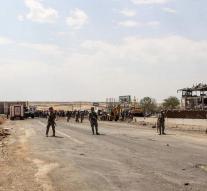 diyarbakir - Three Turkish soldiers were killed Thursday by an explosion in southeastern Turkey. A roadside bomb that was placed by the PKK, according to the authorities blew the vehicle where the soldiers were in. In the same area in the province of Bitlis a village watchman was slain by militants, Turkish media reported.

The roadside bomb six soldiers were wounded, one in the battle in the village.

With the latest attack, the death toll from violence attribute the authorities to the PKK since Wednesday has risen to ten. In all cases, some 250 injured in various attacks.