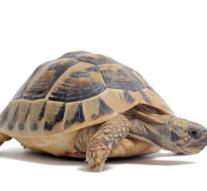 - "Four people in the German city of Nuremberg for hours to find a turtle that had disappeared in the bodywork of a car."