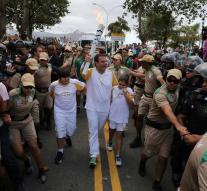 - Protesters Wednesday in a suburb of Rio de Janeiro clashed with riot police during the passage of the Olympic torch. Hundreds of protesters blocked the route. The police officers were pelted with stones. It was then intervened hard with tear gas, pepper spray and rubber bullets.

The disturbances occurred in the city of Duque de Caixas, after the flame was brought ashore by boat. The Olympic flame has three months made a round of Brazilian cities.

The police action led to criticism, especially when it became known that a ten year old girl had ended up in the hospital after she was hit by a rubber bullet. The police action was necessary because the demonstrators would not listen.


The demonstration was against the high cost of the Olympics and the lack of money for education.