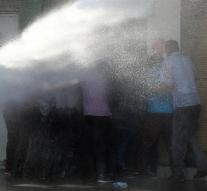 - "In southeast Turkey on Sunday demonstrated against the decision by the government to replace dozens of mayors by administrators. The police had to use tear gas and water cannons to disperse demonstrators."

"The HDP has strongly reacted to the removal of the mayors. The party spoke of a,, administrative coup '. The Turkish Minister Bekir Bozdag (Justice) argued in turn that,, are elected officials does not give license to commit crimes. ''"

"The Interior Ministry said that examines whether the 28 mayors,, help and support '' have given to the PKK or the Gülen movement. At least a dozen local drivers would already have been arrested."

"Since the failed coup in Turkey more than one hundred thousand people have been dismissed or suspended. At least 40 000 people have been arrested because they would have with the movement Gülen tires, which sits behind the attempted coup by the government."