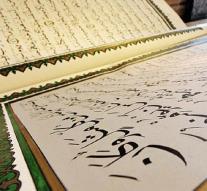 glasgow - The Scottish church is a huge riot occur over a passage of the Koran is recited during Epiphany. In the passage, Jesus was described as a prophet and not the son of God, reports the BBC. Many churchgoers in St Mary's Cathedral spoke as shame.

Most Rev. David Chillingworth said ' to be deeply saddened 'about the resulting commotion. ' It is good practice to enter our church space to other religions and beliefs.' He regrets the great wave of insults that the church as part fell after the incident.