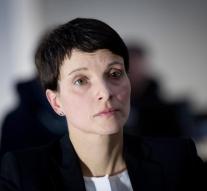 'Germany is no longer safe,' ruled the AfD president. 'And it was actually the job of Chancellor Merkel to say to the citizens. 'Petry pointed Merkel earlier on as being primarily responsible for the' dangerous immigration chaos 'in the country.

For the CSU, the Bavarian sister party of Merkel's CDU, the terrorist violence led to argue again for changes in immigration and security. 'We owe that to the victims, anyone who is affected by it and to the whole population,' said party leader Horst Seehofer. He has long been critical of the excessively generous asylum policies of the government in his eyes where his party participates.

That the culprit was probably a refugee who was offered protection in Germany also led in other European countries to fierce reactions. Slovak Prime Minister Robert Fico expects to own say that European voters will insist on more measures to limit migration to tires.

'The facts are simple: a migrant who arrived and Germany and received refugee status, is now being questioned as a suspect in a gruesome and disgusting crime,' said the prime minister Tuesday at a news conference.