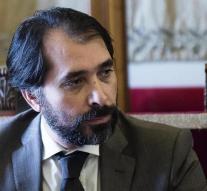 rome - Raffaele Marra, the 'right' of Virginia Raggi mayor of Rome, was arrested Friday. Marra was arrested because he is suspected of corrupt practices in transactions with real estate in 2013 when he was about public housing. He is currently chief personnel in the municipality of Rome led by the elected in June Raggi of the protest party M5S (Five Star Movement).

The 38-year-old Raggi is the first female mayor of the Eternal City. She was wildly popular when she had more than 67 percent of the vote in the second round of elections on June 19, inter alia to fight with her promise corruption. Her star burns out quickly according to pollsters. She seems a millstone around the neck of the Five Star Movement, the second party in the country.

A few days after taking office, was suddenly dismissed her new alderman of Finance. Next is a series of top officials resigned and the Councillor for the Environment, Paola Muraro, resigned because she is suspected of abuse of power.