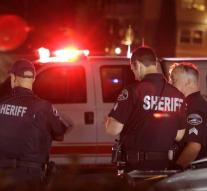 seattle - It is still a mystery how a 29-year-old aviation officer in Seattle could steal a passenger plane and later crash into a small island. The man died in the crash. The police assume suicide. No victims have fallen on the ground.

The federal authorities have started an investigation. Unlike the local police previously claimed, the man was not a plane fitter but a ground steward, says the FBI. Around 8.00 pm local time, the man managed to get the device out of a hangar and get into the air. Then he flew over Seattle for an hour, taking out many antics.