Home / World / Richest African invests in US and Europe 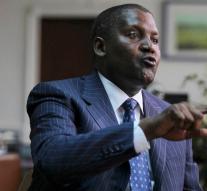 - Africa's richest man wants to invest 20 to 50 billion dollars in the United States and Europe in the coming years.

Africa's richest man wants to invest 20 to 50 billion dollars in the United States and Europe in the coming years. Aliko Dangote wants to spend that money until 2025 in renewable energy and in the petrochemical industry.

The sixty-year Nigerian cement tycoon announced that Dangote Group will do more than half of its investments outside Africa from 2020.

Dangote has rapidly diversified to new areas and new industries over the last five years. Dangote Cement, where he contributed nearly 80 percent of his $ 11.6 billion personal wealth, spread to nine other African countries. In addition, the Dangote Group built an oil refinery and gas pipelines.

In July, he announced that he would know billions of sugar, rice and dairy production over the next three years. 'The majority of African countries depend on imported food,' he stated. 'You can never have a population of 320 million people in West Africa without being self-sufficient. The first thing you need to have is food security. ''