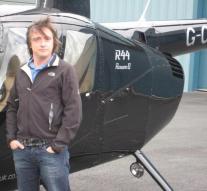 - Presenter Richard Hammond, made famous by the motoring show Top Gear, has caused an uproar by a remarkable statement about ice. In the most recent episode of his new program The Grand Tour said the Englishman that he does not eat ice cream because he is heterosexual.

In the sixth episode of The Grand Tour had Jeremy Clarkson, Richard Hammond and James May on the interior of a Rolls Royce. 'The only problem is that you can enjoy impossible in such a car from a Magnum chocolate,' said Clarkson. At this Hammond said he does not mind because he does not eat ice cream. 'I do not eat ice cream. It has something to do with his straight.

There is a lot of outrage responded ruling Hammond. As he is called, among other homophobic.