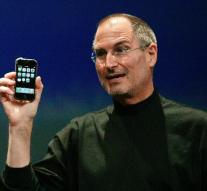 the hague - 'A groundbreaking internet communications device. A widescreen iPod touch screen.' For example, former Apple chief Steve Jobs described the first iPhone. The revolutionary device was on sale in the United States exactly ten years ago and changed the world. The smartphone is now indispensable in our daily lives. There are more than one billion sold worldwide.

The iPhone presentation was on January 9, 2007 in San Francisco. On 29 June of that year, the device became available to the US consumer. There were initially two versions for sale, one of 4 gigabytes (GB) of storage and one of 8 gigabytes.

By the way, there were already mobile phones with which you could use internet, listen to music and watch movies. However, Apple made a total of new news with the introduction of a touchscreen and apps. The developments have since gone fast. The current iPhone 7 is 240 times faster than the first iPhone 10 years ago with the latest chip technology. The storage memory is up to 256 GB.

The number of iPhones sold sells back, partly due to Samsung's competition with its Android devices. By 2015, 231 million iPhones were taken, 211.8 million last year. Each new model is presented as a sensation. The so-called buzz- the rumor- is important in advance.

'The smartphone has become a first necessity for life,' says Professor Cor Molenaar, an expert in e-marketing. He is author of the book Why Customers Would Rather Have a Smartphone than a Car. 'Steve Jobs said that your consumers should not ask what they want, but you have to confront them with the new product,' says Molenaar.

The iPhone's success is mainly due to the so-called quick adoption by the consumer. In the world of marketing, that embrace is very important to the success of a product. 'You must always come up with new applications and the device must be beautiful, which means the consumer: I want it. The product must become indispensable, a first necessity for life,' said Molenaar.