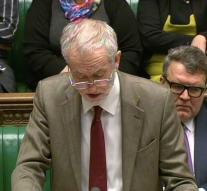 london - British opposition leader Jeremy Corbyn threatens an important part of his shadow cabinet to lose, because he refuses to speak in support of Prime Minister David Cameron 's plans for air strikes on Syria.

His shadow ministers accuse the Labour leader " fundamentally unfair " to be and to treat his squad with contempt after he had written that he could not support the air strikes. He had his shadow Cabinet promised that there would be a joint decision.

Within the batch deep divisions over how the parliament next week to vote on Cameron's plans. Corbyn wants Labour " unambiguously " rejects war, while his shadow ministers want to make clear a formal statement that they support Cameron. That would mean Corbyn rebels against his own party, which made his position is extremely vulnerable.