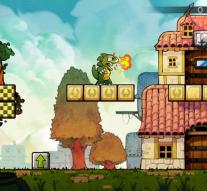 - Wonder Boy. A name that seems quite forgotten appears in the video history that is not long ago. You must be an age (certainly over 35) to remember the glory days of this character from the 8 bit era. Does a remake of the classic The Dragon's Trap also speak the youthful gamer?

Among the boys and girls of Gamestudio Lizardcube, you must definitely walk around a couple of men and women. After all, the original appeared in 1989 for the Sega Master System. At that time, the Wonder Boy series was a well-known name, but in one way or another, Wonder Boy never knew the status of Link, Mario or Sonic, and was oblivious.

But he was taken out of the mothballs. Although it's still a question of whether this remake is going to happen, there will be hordes of new fans who want a whole new Wonder Boy. Because, honestly, the game is dated. Lizardcube has addressed the remake with a lot of love and care. For those who are not familiar with The Dragon's Trap: it's basically a platform game in which you launch the famous Wonder Boy (or, very modern, Wonder Girl) through many dangerous worlds of monsters. You are cursed by a mechanical dragon- which was all the way to the end of the eighties- and turned into a running fire-sprinkling lizard. By defeating big end bosses (including many dragons) you change each other in a different animal. From lizard to mouse to hawk to lion to fish man. Each character has other skills (so the mouse can stick to walls), allowing areas to be reused. The original had its problems with the controller and unfortunately they are not (sufficiently) resolved in this remake. Too bad, because you just have too often to feel the life without it being your fault.

+ A remake with a lot of respect for the original developed

+ The ability to play the game in retrospect and sound

- Some gameplay issues are not addressed properly

Wonder Boy: The Dragon's Trap is a very nice remake of an eighties game. Anyone who wants the same platform experience, but completely with gameplay now, can look better at the upcoming Ori and the Will of the Wisps. But whoever has a nostalgic mood or curious about what previous-generation gamers cluttered the tube, do not miss the Dragon's Trap at all.