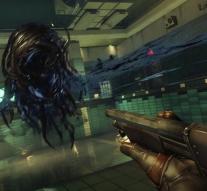 - Do we know Prey yet? Not he The game, whose development began in the 1990s and eventually ended up on the Xbox 360 and PC, was nowhere to be a hit. Developer Arkane is therefore trying to innovate with... Well, Prey!

What if your life is a big lie? You think you wake up every morning and go to work, but actually there's something worse. It comes across to Morgan Yu, who wakes up one day and finds himself in a simulation. The place where he lives, a space station, is overwhelmed by malicious aliens who can change into virtually every object they want.

The game has a lot of structure away from the Bioshock games. You punch your way through the game, but also find objects that will help you build new weapons and improvements. The twist: every object that you pick up can thus also be an alien that's alive to you!

As a shooting game, Prey has not completely painted out. The popping feels a bit weak and it's often more that you're shooting around and hoping you'll be touched, than you're really going to focus on.

But that's actually the only weak point in the game. The story, the intense scary atmosphere that hangs on the station and the opportunities you get to solve problems in the game provide an interesting game experience.

Find your game with a fun and well-told story and an interesting game world, then you'll be happy with Prey. Do not expect a shooter of the top shelf.