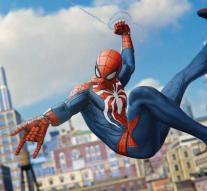 - Spidey is back! After the red spandex-wearing spider man was absent for a number of years in the game world, he is now finally admired again in a brand new game.

The game gives you a typical Spider-Man feeling, but is there enough variety to keep the game interesting for a long time?

Spider-Man is by far the most popular of all Marvel superheroes. When the gifted student Peter Parker gets bitten by a radioactive spider, he suddenly gets all kinds of spinning powers. Supernatural power, can stick to walls and raised senses known as his Spidey Sense. Since the character was introduced in the 60s, he stands head and shoulders above colleagues Iron Man, Captain America and Thor.

This is partly due to the recognisability of Peter Parker and his alter-ego Spider-Man. In addition to his heroic scenes, Parker invariably faces problems in his personal life, who are always able to get entangled in the web of his superhero life.

In Marvel's Spider-Man on PlayStation 4 this is no different, although the game gives a twist to the well-known story of Spider-Man. Most films and games focus on the origin of the character and why he decides to fight crime. Insomniac Games, makers of the game, have wisely decided to skip this.