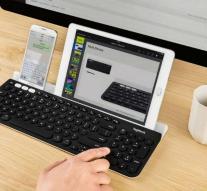 - Hardware manufacturer Logitech, the computer user since time immemorial up with keyboards, mice and other gadgets that make life easier. Recently, the company has a remarkable new keyboard and two mice released for the connoisseurs.

Of the three gadgets keyboard is the most remarkable. The wireless device can in fact be used to- to be simultaneously connected to three computers, tablets, smart phones or other gadgets- via bluetooth. So as you can make it at the same time hang on a laptop, iPad and smartphone, as I did.

The keyboard has an opening at the top to slide in a device. This is big enough for my iPad Pro (12.9 inches) and my iPhone 6 together with the iPad on its side and the iPhone alone.


But how does it work well, a multi-device keyboard? Actually it is quite simple: the upper left are three white to find buttons that are each linked to a device. So you can have are the laptop under one button, the tablet under two and the phone under three. then he is in Position 1, you can type on the computer. With the press of a two-button denotes tapping the tablet and press option three you can use it in combination with the phone.

Is not that convenient? That is huge to how you work. Yes, works because the K780 is particularly useful in the office. You always have a laptop with you and you use it also in the office, then the need for this multifunctional gadget is not very large. But you'd rather go use a tablet and you like being able to answer a text message while working with the press of a button on a real keyboard, this keyboard is a nice addition.

Of course the question remains: keyboard typing too fine? Yes, though the design is some getting used to. The keys are in fact circular instead of square, as in regular keyboards. It feels a long day of weird, but then you do not know better.

Is there nothing negative to report? Yes, but that is mainly due to the bluetooth technology which leans the device. Switching between devices can sometimes take up to a second. That's not a huge problem, but if you want a quick reply to a notification on your phone, then it just breaks the flow to you.

The Logitech K780 is a recommended price of € 99 a bit on the price, but if you fall into the target, I can definitely recommend it.

Then the two mice, which actually can be divided under the headings 'Rolls Royce' and 'Lamborghini'. The MX Master falls into the first category and just like a Rolls Royce is a luxury device for people who want more than just the standard functions.

The mouse is nicely designed and the right hand (sorry, lefties, but the MX Master is only for right-handers) fits fine over the device. All buttons then sit under the fingers, in addition to the two standard buttons, a clickable scroll wheel and under a quite separate button.

This makes switching between gradual and smooth scrolling, or whether you want a 'klikkerige or smooth scrolling movement. Furthermore, the wheel can turn itself (this is to change the options in the corresponding software) if you are in 'click mode a hefty flick shows. If the wheel stops, he turns back.

To find the side, below the thumb, vertical scroll wheel lets you scroll standard left and right. Useful if you work a lot in Excel, with wide spreadsheets. In addition, to find there are two buttons and completely against the bottom of it is the 'sign' key.

By holding the button and gestures with the mouse- to make certain gesture, are to carry out more actions- yes. What features are among the gestures, is also set in the software for this gadget. On my Mac, I can eg arrange all open windows with a swipe to the left and with a wipe down I open Launchpad. Incidentally, this feature also works in Windows and you can for example open a specific application or skipping songs in iTunes.

It's the first time I have such a button on a mouse encounter and as a fan of the gestures you can do on the touchpad on a Mac, I'm happy that I can run on a mouse this way. However, I must honestly say that they are not as easy to perform as for example Apple's Magic Trackpad.

Incidentally, the battery of the wireless mouse can be recharged by plugging a simple microUSB cable into the device. During charging you can still use him just fine.

The MX Master does cost a hefty penny: it has a suggested retail price of € 99. In a market where you can buy all a pretty decent mouse for a few bucks is though quite pricey. That does not mean that you get value for money. The mouse feels great in the hand, offers lots of options and makes using your computer more fun.

If the MX Master so the Rolls Royce among the mice, then the G900 Chaos Spectrum Lamborghini, made purely for performance. We are talking then about a gaming mouse that are also to be used by left- and right-handers. The design is in fact completely symmetrical and which buttons do what, all can be controlled in software.

Because the G900 all about performance, here just a few small numbers, the response time is one millisecond, the precision you can set yourself from 200 dots per inch (dpi) to 12. 000 dpi and a total of 11 buttons you as said self can.

If you do not immediately understand what this all means, let it say so: the cursor responds fast to movements of the mouse and the device can be set very sensitive. So if you have a steady hand, you can react quickly while gaming with minimal mouse movement.

Like the MX Master you can also turn on the G900 with a button at the scroll wheel between incrementally and continuously scrolling. Oh, and you trust the wireless connection is not, you can pair it with an included micro-USB cable to the computer in question, after all mouse data is also transmitted over the wire.

Then the crucial question: he mousing good? Fortunately, the answer is also yes. It may also be, for the suggested retail price of € 179. The G900 is not for everyone, only if you have lots Is gaming and value on accuracy and speed, then to justify the asking price. But then you have a darn nice gaming mouse.