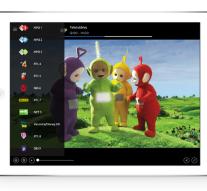 - Who looks more old-fashioned TV? Well, a lot of people, proves time and time again research. The live watching a broadcast is no problem, but the way it is offered, often does archaic. Knippr T-Mobile claims to have solved this problem.

With most providers you're stuck with a basic package of about 30 channels and you lose about two bucks a month. Knippr is nearly complete à la carte TV provider offering its services over the internet. For € 10.99 per month you get a basic package with sixteen channels. This includes such well-known channels like NPO 1, 2 and 3, the known RTL and SBS channels, Eurosport and Discovery.

The rest of the stations- more niche-oriented, such as Animal Planet and Al Jazeera- can be taken individually there. Costs vary, but on average is about € 1 per month per channel. All parts are terminable by month, so you're not locked into an annual contract or something.


The total number of channels is a bit disappointing. Currently there are 48 different available. The most important channels for Dutch sit here well, but the lack of among others, the BBC is noticeable. Of course, there may still change in the future.

It is also a pity that it is not possible to imagine complete package themselves together: the channels in the basic package you're stuck. That is not the fault of the service, because unfortunately is the regulation of TV providers in the Netherlands as in another.

Than watching yourself. This is done exclusively through apps. Knippr is available for iOS, Android and Apple TV also supports Chromecast and AirPlay. In addition, a web player that can be watched via a browser.


The interface of the app is fine: all options are easy to find and even specific TV programs using the search function at your fingertips. While watching, it is possible to pause the broadcast and rewind up to 30 seconds. Also many stations support the option to watch a program from the beginning, so even if you just turn halfway through the stream. There are no other shooting modes, though most programs up to seven days after the first broadcast available to look back.

Almost all channels are available in HD. For this Knippr recommends an Internet connection of at least 5Mb / s, which is a modest rate. Most households have a hefty higher speed. The picture quality is good and comparable to 'normal' TV.

The basis of Knippr is top notch. The service is flexible in both the way you look and in terms of subscriptions, while it is also very affordable. It's just a shame that the choice in terms of stations is still rather limited and that anyway you back is attached to such a package. But if you already have an Internet connection, but live TV can not let go, then this is a good option.