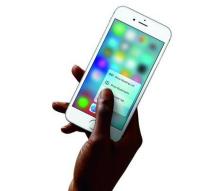 - It is an odd year, so Apple will release an iPhone from S model . A small improvement compared to the previous version , as it is believed quite general. Is that in the 6s also the case ?

Like every S model also sees the iPhone 6s almost identical to its predecessor. The device is slightly thicker and heavier, but without explaining the versions side by side, you will not notice the difference. Actually, you only see that someone has a 6s, if he or she has the rose gold version, because that is the new color is introduced this year.

The phone is in appearance not much has changed and so does the screen. The 6s has a 4.7 inches wide screen with a resolution of 750 by 1334 pixels, while the 5.5-inch 6s Plus has a Full HD screen. No 4K resolution or other silliness, but while testing the 6s I never thought "I wish I had an HD screen.

Under the hood has changed somewhat. The device includes the latest A9 processor from Apple. The company has become very good at making fast hardware, and that was shown again even more. Daily use is - as you would naturally expect from a brand new phone - very smooth, but especially in applications that require lots of computing power you will notice the difference with the predecessor. Games load quicker, faster video editing: The A9 is just a strong step forward. Incidentally, it is also nice that finally 2GB of memory is in the device, for example, make more tabs in the Safari browser or apps can keep stored in memory, so switching between tasks yields less load times.

TouchID the fingerprint sensor is also improved. Now this really quickly scans your finger and unlock the phone before you can read the notifications on the standby screen. Indeed, if I even want to check the time by pressing the home button, he's got all read my copy and it jumps to the home screen. Thanks so so fine that it can so quickly, although it would also be useful if the option is processed in a future software update to delay the scan something.

Then the main new features of the 6s: 3D Touch. Why Apple chose this name when it is actually a version of Force Touch, not completely clear to me. The new feature will be tougher pressures detected on the screen and the phone can thus combine different functions. The technique was first used in the Apple Watch, later also to the touch pads of different MacBook models.

Let me start by saying that 3D Touch feels good. After a hard pressure always feel a short vibration of the new Taptic Engine vibration motor (also previously used in the Apple Watch and MacBooks), which you know you have pressed hard enough. Or, if no function is linked to a hard pressure, feel double vibration so you know: it can not be used here. You never doubt about whether you have done something wrong, the phone gives good feedback.

Then an example of the effective use of 3D Touch: tap an app to the home screen, which opens as expected. Give you a hard pressure on the icon will appear in some cases now an additional menu of options. Take the camera: press hard on the app and you can see from the new menu directly to the selfie camera. Press hard on the iMessage app and you can select one of your favorite contacts directly to send an SMS to. This capability can be compared with the best right-click on a computer, you get more options and faster shifting, making sure people who frequently use the telephone and switch between many different apps, here will benefit from. In 3D Touch applications can also be used. The most common example is in the Mail app from Apple itself. By pressing in the list of hard-mails on a message and keep the finger on the screen, the e-mail appears on the screen so you can see exactly what is capable. The finger can then be removed from the display, then the mail still as 'unread' is checked and you know you have to deal with him later. Would you prefer to dive straight in the mail? Then you can - even with your finger on the screen - even press harder, and your mail as it were in diving.

It's a small addition on paper and to be honest: it is mainly for power users which half the day with their iPhone in hand. The only drawback is that it is not always clear where the function is to be used. There is no indication that an app Touch supports 3D, so definitely in the beginning I was constantly everywhere but hard press to find out where the function is and where I could not use. With time you learn what the best course implementations, so it's a temporary inconvenience, but nonetheless a blemish on an otherwise great invention.

It is especially the apps from other companies that do not currently use the feature, though it seems a matter of time. Facebook has already announced it in a future update 3D Touch features will introduce and subsidiary Instagram has been making use of it. Apple also has a section in the App Store rigged specifically for applications of unique iPhone 6s functions use.

The other big news in the iPhone 6s is the improvement of the camera. That happened in both physical and software terms. So there is now a 12 megapixel camera on the back, while the front camera can make now 5 megapixel photos. Thanks to the increased resolution, it is possible to shoot video in 4K resolution, whether it be nice to tap when it comes to storage. Every minute you lose 300MB, so people with a 16GB device, beware! The quality of the videos is very good.

At the software level, Apple has added the so-called Live Photo function. This makes the camera before and after shooting a picture a few other shots, giving you a "live photo" that animates by a hard pressure in the fotoapp. Taking a photo takes no longer has the camera automatically begins to store all images as soon as it opens, but adds them together until after the picture is taken. A nifty addition, though it's not very original: Nokia and HTC had such an option for some time into their phones.

In addition, Apple has quite the plank bad development when it comes to sharing live photos: it is only possible to see them back on other Apple hardware. The company has promised to release tools for site and appmakers so the moving snapshots also seen, for example on Facebook, but that kind of promises, Apple has already broken even. With the introduction of video calling service FaceTime, for example. So yeah, fun though: some animated picture, but it was only really been nice if for example I can make an animated poison-file had to so that I can share it easily online. Hopefully it straightened out, otherwise it is just another feature that people who are not hardcore Apple fan, immediately turn off.

Anyway, the rest of the improvements ensure that Apple still has one of the best phones when it comes to picture quality. However, the hole is, for example, LG, in which the G4 has processed an excellent camera, smaller and smaller.

With the price of the new equipment is something remarkable is happening: they are more expensive than previous models. The iPhone 6s starts at € 749 for the 16GB model (which you otherwise simply do not buy, because that is far too little memory - especially with the new 4K video capability and the live pictures) and € 849 for the 6s Plus . That is, in both cases, € 50 more than the cheapest 6-models last year.

Apple keeps namely the dollar prices as a guide and yes, the euro is currently simply lower than last year. Anyway, I have no message to the consumer, of course, and those prices have nevertheless beginning to be a little crazy.

Especially considering the devices that are available on the Android side of the market. For around € 500 you already have a Samsung Galaxy S6, which can be pretty good measure comes to hardware with the new iPhones. Or take the LG G4, excellent Android phone for around € 450 for sale. And later this year also two brand new Nexus devices from that in terms of hardware also high end may be mentioned. Incidentally, for the price of a 16GB an 64GB 6 6s also available.

With the iPhone 6s Apple follows its formula right: an excellent product - one of the best of its kind - but you must be willing to pay the prize. Yet the increase was sticking a little, especially considering the fact that the news in the device are good additions, but not exactly so revolutionary that they are worth € 200 which the device costs more than competing smartphones.

That is of course in case you want to buy the phone separately and not in combination with a subscription. You can thus get a decent deal, then the iPhone 6s very easy to guess, because it's just an attractive, high. People who have an iPhone 6, need not be jealous. Save tasty one year on: all new features and more are next year, no doubt in the iPhone 7.