Home / Tech / Review: Board games for the beach 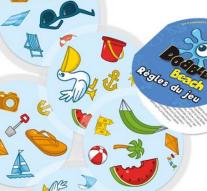 - The Telegraph will now also test board games. Because it's summer, we finish off with a review of three family games specially made for the beach, namely: Dobble Beach, Jungle Speed ​​Beach and Perudo Beach.

At Dobble Beach (€ 15.99) players must search for one identical symbol between two different cards. There are 30 water-repellent cards in the game and there is always one agreement. It's important that you quickly compare and react quickly to each other. There are five mini-games to play, each with their own rules. So you can make it as difficult as you want.

Each player receives a cup and five dice in the same color at Perudo Beach (€ 22.99). Throw the stones, but let them be covered by the cup. Then tick what you threw and bet how many stones are in the game with a certain amount of eyes.

The first player makes a bid and it is up to the others to overcome this or to say that it is being blown. Who is next to it loses a dice.

Because the test group had a twelve year old, we played a fairly simple variant of Dobble Beach, comparing your own ticket with that of the middle pile. If you are fine, you will get the card. Those who win most tickets win. It is sometimes difficult to quickly find the same symbol, which does not really matter if you are young or old. It's a fun and challenging game.

Jungle Speed ​​Beach seems very simple at first, until you notice that there are sometimes quite small differences between two cards that look similar to each other. It creates hilarious moments where sometimes one or more players get to the totem, while that is not necessary at all. Laughter overall. A very nice game that can play as many as ten players.

A game that you should pay attention to is Perudo Beach. When bidding or bluffing, keep an eye on how many stones are still in the game, otherwise you will be very raped by the stone. The age advice is 8+, but I think that is too young. The dice game takes the necessary thinking and you have to be older. Perudo Beach may not be the right game if you are tired of sunbathing and swimming.

+ The games are stored in neatly accessible areas.

+ The tickets are water resistant.

+/- Read the manual carefully in advance. That's not easy to do on the beach.

- Perudo Beach is 8+, but you really need to be older.

With our two-adult and a child's test group, it was soon clear what the top three of these board games are for the beach. The absolute favorite is Jungle Speed ​​Beach. We laughed tremendously while playing, especially when mistakes were made. Secondly, Dobble Beach comes. Nice to do and exciting if you play at high speed. At Perudo Beach we had a quick look, but that may also be because we were too few players and one too young turned out to be.