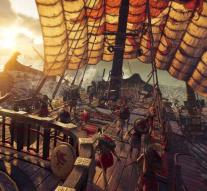 - Assassin's Creed Odyssey throws you right into the world of ancient Greece, where you as the oldest child of a Spartan general travel throughout the country and experience a personal story full of intrigue and violence.

The game knows how to combine familiar and fresh elements from the series in a strong way, resulting in a gigantic game full of activities to experience. Because of this ambitious approach the title certainly has some beauty mistakes, but that should not spoil the fun.

Anyone who has been in the world of games for a long time has undoubtedly heard of the Assassin's Creed series The interactive history lessons published by publisher Ubisoft have always been taking you to a different world of history books as a player. explore. Where previously Italy, England and Egypt were reviewed, it is time in Assassin's Creed Odyssey to get to know Greece better during the Peloponnesian War.

At the beginning of your adventure, you choose whether you want to play with a male or female character (Alexios or Kassandra) and then you are immediately put to work. As a mercenary you fight in various Greek areas and stand at the side of the highest bidder, until you come across a mysterious sect that is more dangerous than anything you have ever defied. As the title of the game already reveals a bit, the big trump card within the newest part of the series is that you as a player experience a personally formed story.